skip to main | skip to sidebar

Listen, if you feel the need to jam a pin in a selectorized machine at the gym and it doesn't fit, don't keep on jamming. Grasp the pin firmly in your hand, stare at the tip, and quickly jam it into your eyeball so that I don't have to try to unjam the machine. Thank you very much.
Posted by ... at 6:48 PM No comments:

DWI: Driving While (an) Idiot

Anyone who puts drinking before custody of his kids and his job deserves the best I have to offer. This person needs an ass whupping so bad that snot foam would form in his nostrils. An ass whupping so bad he'd have to be prescribed Cymbalta for the lingering effects. Seriously, what kind of jackass gets sloshed and drives while he is in a custody battle trying to prove HE is the better parent?
Posted by ... at 4:37 PM No comments:

Don't buy expensive equipment and brag about being a triathlete if you can't even maintain 17 miles an hour on your fancy bike. Go suck wind somewhere else, poser.
Posted by ... at 7:56 PM No comments:

The person at the top of my ass whupping list is my oldest brother. Five kids by three women and no dime of child support money. In fact, I can't recall the last time he had a job. But he has money to drink and sample other things. He has a roof over his head because two dumb women fight over the chance to take him in. One is a gorilla. I guess she likes him because she can't get anything else but a zookeeper. The other one is a mystery.

My only hope is that he tries to steal something by jumping a fence and his balls get ripped off.
Posted by ... at 7:44 PM No comments: 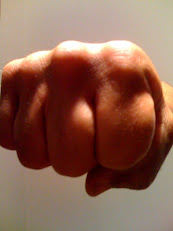 Who needs an ass whupping?